My Day at the Horse Race

Last Saturday my Mongolian friends, Oko and Shine, took me to the largest horse race in Mongolia, and, according to the official Guinness Book of World Records’ observer, the biggest horse race ever recorded!

However, just to get this out of the way, no horse racing was actually witnessed. In fact, in true Mongolian style, we showed up about 30 minutes too late to see the famous Mongol horsemen (and horsewomen!) gallop through the massive finish-line gate. Although my hosts were prompt and timely, the information center they spoke with about the race told them that it would end at 3 pm! So, when we got there at around noon the 4,249 riders had just finished. Regardless, the festive atmosphere and massive scale of the event was a true spectacle.

Heck, the ride there was an adventure enough for me! The father in the family, Shine, had recently returned from Fiji where he took an English course for 4 months on the beach (sign me up to teach there next!). As a result he was a bit rusty driving. At least he had the courtesy to warn me beforehand! For those who haven’t been to Ulaanbaatar and witnessed the incredibly erratic, aggressive driving style and blatant disregard for traffic laws, this was rather worrisome. However, we managed to escape the city traffic unscathed.

It was only when we got 20 kilometers outside UB to where we faced our biggest challenge, the roundabout, rotary, or traffic circle (depending on where you come from). As the picture below shows quite well, traffic circles here move counter-clockwise which is NOT, evidently, the same direction they flow in Fiji. 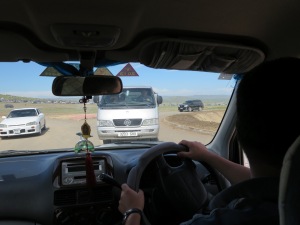 The exact second I almost soiled myself, but somehow managed to take a picture instead.

Approaching the finish line, we saw riders headed in all directions on horseback. 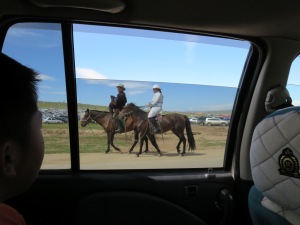 While the race was over, the fun was certainly not! The finish line party was basically a Mongolian country fair or carnival, with all sorts of food vendors, side shows, and smaller events. Taking advantage of the entire valley, the attractions were very spread out. In fact, this may also be a Guinness World Record for the world’s most vacant parking lot: 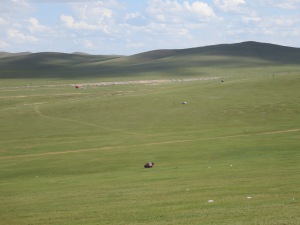 No threat of someone stealing your spot out here!

A few of the sites… 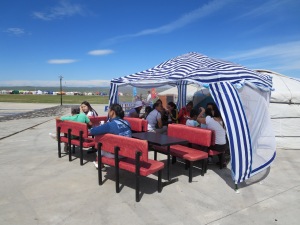 The tented seating is attached to a traditional ger, or Mongolian yurt. 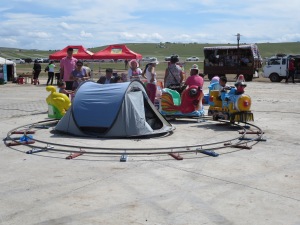 I was very tempted to ride this one… 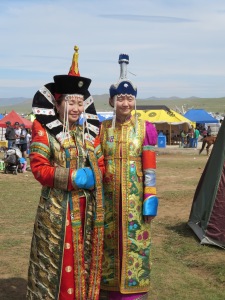 These Mongolians paid the businessman to dress up in traditional clothing for a photo shoot. 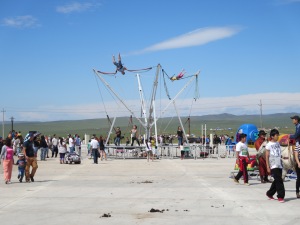 Nothing traditional about this, not to my knowledge at least. (Although I may have been thrown that high by a cowboy while wrestling the last time I was in the countryside.) 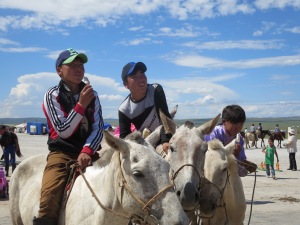 Don’t believe his racing number, there were only 4249 riders according to the announcers!

Of all the attractions we passed, archery really caught my eye. One of the three manly sports, there were several make-shift shooting ranges set up where for 2000 tugrik, or about $1.30 you could shoot 4 arrows.

Could I resist? No, of course not. 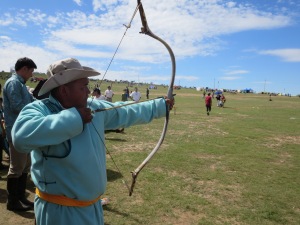 Man in a ‘deel’ or a traditional garment still worn commonly  in the countryside but only occasionally in the city, mostly among the elderly. 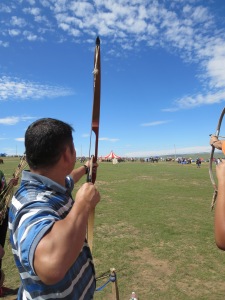 Shine takes aim at the target, a sheep skin stretched between two posts.

In front of the target, these arrow-fetchers had perhaps the most risky job of the day! 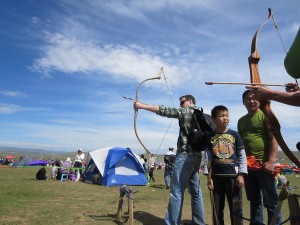 I was just starting to get the hang of it after 8 arrows. My last one glanced off the bottom of the wooden post.

And then, it happened…

I momentarily forgot Alvin and his mates were all male chipmunks. A smiling crowd quickly gathered reminding me that even accidental displays of homosexuality – especially man on chipmunk action – probably aren’t exactly okay… oops! To be fair, the Mongolian in the blue hoodie was definitely female (as shown by the universal leg gesturing). 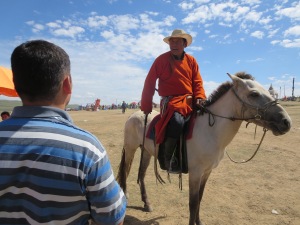 If I had to guess what they were saying it would go something like this: “Could you tell me when the racers are supposed to get here?” “The race ended two hours ago…” 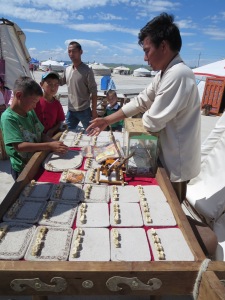 A traditional Mongolian pastime, “Bone games.” Using four horse vertebrae, the player rolls his hand and somehow “races the horses,” according to my host. I’m still waiting to learn the rules.

This little guy beat the dealer!

And then there was good ‘ole fashioned street gambling, minus the street (of course) and plus one cobblestone plaza lined with gers.

Better odds than Vegas I suppose.

After exploring the fair grounds for a bit we retreated across the plain for a picnic with a grand view of the spectacle.

My warm, welcoming, wonderful hosts! Shine is holding up khuushuur, a meat patty, in this case beef, fried in a pancake. We also had bread, sausage, cucumbers, watermelon, milk tea, and some chocolates I brought!

Here is a sampling of the views from the hill…

We listened to Shine’s country music CD from the car, a mixture including “Rhinestone Cowboy” and Dolly Parton. Meanwhile, the son played techno off of his phone and danced the robot for us. (He was too shy to let me get it on tape but he is GOOD!)

Cloud watching is a great way to pass the time, especially with a storm front coming through! 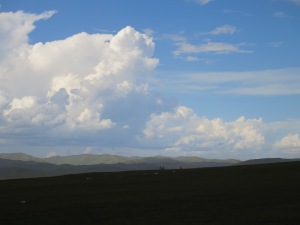 Those three dots were some of the nearest picnic goers.

Once the rains came in we made our way back to the city! 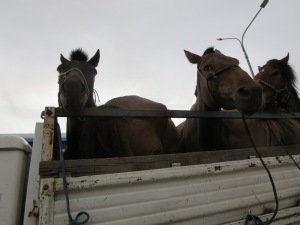 The traffic on the way back was of a different sort than the kind you find in Boston.

On the return trip we were stuck in traffic from the event for quite a while. Still, we managed to play a word game for about an hour where each player had to think of a different noun that starts with the last letter of the preceding one. I was very impressed with the vocabulary of my hosts, especially their son, and even got to practice teaching English a bit – something that will soon be a more or less full-time job!

Anyway, hope to post some more pictures soon of my daily life here in UB. Looking forward to your comments! (Also, by clicking on the pictures you can enlarge them!)

4 responses to “My Day at the Horse Race”