Last weekend I went on a horseback riding outing in the countryside with a group of French, Australian, Canadian, and American ex-pats. We met at noon in the famous Sukhbaatar Square in the heart of Ulaanbaatar.

A ger made of flowers! I’m sure this doesn’t stay up all year, especially when it’s -40 degrees!

I don’t think anyone actually lives in it…

After waiting for several stragglers who were running on Mongolian time we hopped into a large van the trip coordinator had reserved for us. After juggling seats and gear around for several minutes, we were off to the nearest convenience store – after all what’s a weekend trip without snacks and beverages!?

Love me some Chewy Fruit in my milk!

Unfortunately, we had the misfortune of getting caught in a nasty traffic jam shortly afterwards. We were stuck on the same kilometer stretch of road for almost an hour before reaching the outskirts of the city where things finally sped up. Unlike the weekdays, when cars with certain license plate numbers are banned from the roads at penalty of heavy fines, there are no restrictions on vehicle traffic on Saturday and Sunday.

After escaping the city and driving for an hour through the surrounding hills and valleys we reached the entrance to Terelj National Park, where an orange-vested man demanded a 3000 Tugrik fee from each of us. According the group members who make this trip routinely, this was either a very new policy or a profiteering individual dressed as an official… Regardless, the roughly two dollars were worth entering the park unhindered.

When we finally arrived at our guest ger camp it was nearly 2:30 and some of our group still hadn’t eaten lunch. After snacking, we began to saddle up for our afternoon ride and by this point it was around four o’clock. Having ridden two years ago in a traditional Mongolian wooden saddle and vividly recalling the awkward bruises it left, I was really hoping the rumor was true about this outfitter having Russian tack. 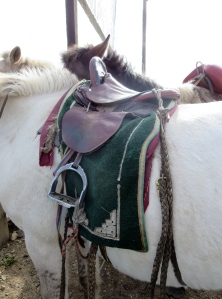 This tiny saddle is not big enough for 85% of adults.

Upon inspection there weren’t any wooden saddles, but the ones they had looked a bit Frankenstein-like. Mine for example consisted of a tattered fake leather cushion stretched over a pokey metal frame. Other saddles looked like a hybrid between English and Western, but probably ones designed for children! And regardless of the saddle, all the stirrups were steel, circular, and extremely short – at least compared to the Western riding I’ve done. 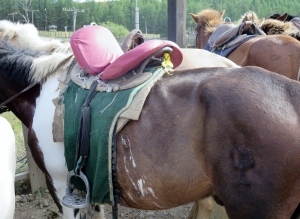 Crappy cushion over steel frame means a very uncomfortable ride. Mine had far less padding than this one!

For numerous reasons most of the stirrups were not adjustable either. I pleaded with my Mongolian guide to lengthen the stirrups by using nearly half my vocabulary to say “excuse me,” or ochlaarai. After getting his attention, I made some awkward hand gestures that to him looked like I was showing off my Western cowboy boots that I’d brought with me from the States. After a minute of intense boot inspection and apparent approval, he understood what I was actually trying to ask at which point he gave me a “you’re crazy, that’s how long they’re supposed to be!” look and quickly moved on to assist other riders.

Slowly accepting the fact that this ride would be very uncomfortable, I snapped a few photos of fellow riders who would endure a similar fate!

Our fearless group of ex-pats waiting to head out.

Looking around I was half-expecting our group to be led around a corral on pony rides! Mongolian horses are much shorter and often stockier than most Arabian varieties common to North America. In fact, the guide’s son, who must have been about five years old, was on a horse the same size as mine.

Our guide with whistle in mouth signaling it’s time to ride!

Setting off, I was surprised to see that unlike the trail rides that I was accustomed to the riders were not in-line along a set trail but spread out riding side by side. The guide’s main role was to herd our horses in this formation, and depending on how he felt he determined the speed we went!

Being herded out on the trail!

Of course, none of us spoke excellent Mongolian and he spoke no English so we had no idea what was happening most of the time. The best form of communication was the long stick he used to whip our horses, and occasionally us, to get the herd moving faster. His piercing whistle and booming yells, usually employed as a threat to being whipped, would also get most of the horses trotting.

A few minutes into our excursion we rode through a river nearly three feet deep. While most of us got soaked from the knees down I managed to avoid getting wet by propping my feet up on the withers of my horse. Little did we know at this point, but the trip would be measured by river crossings. There were nine in total!

One of the many rivers that day!

As we passed through the meadows and woods, we came across the hay fields that support the herd during the wintertime. Along the way, our herder paid a visit to one of the sites where the grasses were being harvested and stacked. The teenage boys were using scythes to cut the high fields down. 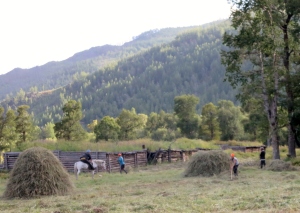 While the Mongolian horses weren’t quite as fast as the ones I was used to riding in the States, they had unbelievable stamina. I think I had plenty of company when I admit I stayed busy just trying to stay on mine!

The guide was whipping, yelling, or whistling at our horses every few minutes to keep up the pace! That meant most of us were trotting, and with the stirrups so short the group’s thighs were burning and knees aching after just an hour.

“I just can’t do this!” one experienced rider exclaimed. Resorting to riding without stirrups and cantering, he charged ahead then waited for the group to catch up.

The death trot was not an option for me either! One reason was that trotting meant the steel frame pounded my tailbone to the point where I would have some very awkward bruises for the next week.

Another reason was that my horse was a feisty fella and feared the herder’s whip more than the others. Using the long end of my lead rope which, oddly, was still attached to the harness, I whipped my horse into gear. “Cheww!! Choo!” I screamed in the same fierce tone as the Mongolian guides. It worked! Once my horse got started it took a LOT to slow down. It also really like detours too. While there was a general trail through the meadows, it liked to explore the nooks and crannies of the valleys at a full gallop! 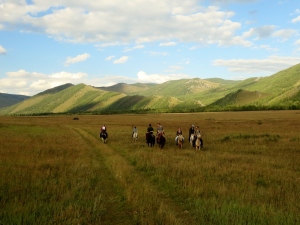 The scenery was okay too by the way. I mean, if you’re into that sort of thing…

As we charged across the plain, a flock of birds unexpectedly flew up  a mere meter in front of my companion’s horse. Spooking, the horse put on the brakes! The rider clung to his horse’s neck as he surged forward. Wrapping his legs around the mare, he sloughed off to the left side, hitting the ground. Thankfully he was a real cowboy and got right back on. A very graceful dismount if you ask me!

My horse and I ran through most of the fields behind me! (If you can’t tell from my hair.)

View from the hilltop at the halfway point.

Father and son. No, I didn’t ask for a Lion King scene re-enactment. It just happened!

Our guide decided to make my friend, Katie, the object of target practice! He shot part of the flowers off at us.

Is she surprised by the view or by the fact that the kiddo just hit her in the head? 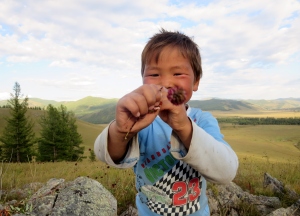 I could get used to this.

On the way back, there were some more mishaps. Our group was tired after two and half hours of riding and it showed. One rider “got stuck” on a tree and the young guide had to come coax his horse down the mountain. Another led his horse off trail and it tripped in a marmot hole, causing him to fall off. A third rider ran into a bee hive and was stung repeatedly while his horse freaked out! He was able to dismount and walk his horse to the trail while the father and son team laughed their butts off and kept their distance. All of these mishaps were in the first five minutes of turning to go back home.

Amazingly, we all survived. While walking was very painful for the next couple days, it was entirely worth it!